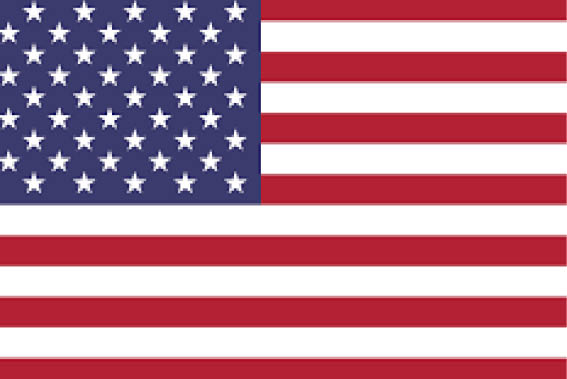 The United States of America (USA), also commonly known simply as the US, is primarily a country within the continent of North America. The area known as the contiguous United States, which consists of 48 of the 50 states plus the federal district of Columbia, has a total area of 8,081,867 km² and is bordered to the north by Canada, to the south by Mexico and by the Pacific Ocean to the west and the Atlantic Ocean to the east. The 49th state, Alaska, is situated to the northeast of Canada and is the largest state by area, while the 50th state, Hawaii, is a group of islands located in the Pacific Ocean within the continent of Oceania.

The District of Columbia is more commonly referred to as Washington D.C. and is the capital of the United States, named after the country’s first president George Washington, one of the country’s Founding Fathers and president from 1789 to 1787. The Constitution of the original thirteen states – created and presented during September 1787, ratified on 21 June 1788 and effective from 4 March 1789 – allowed for a federal district to be created along the Potomac River on the East Coast between the states of Maryland and Virginia that would be under the direct jurisdiction of the US Congress.

In total, the US is the fourth largest country by total area and the third most populous country in the world after China and India, with over 327 million people from various ethnic backgrounds. There is no official national language as such, but English is spoken as a first language at home by around 79% of the population aged 5+, compared with Spanish by 13% and Chinese dialects by 1%. Alaska and Hawaii also recognise their native languages, while French is widely used in Louisiana.

The US has been the largest economy in the world for several decades, growing by about 4% each year since 1999 on average (an average of 2.0% in real growth). In 2018, the nominal GDP exceeded USD $20 trillion, of which Services accounted for an estimated 80%, Industry 19% and Agriculture just under 1%. However, comparing GDP based on purchasing power parity (PPP) basis, the US ranks second behind China, having been overtaken in 2014. On a GDP per capita basis, the US currently ranks 8th highest according to IMF 2018 figures (USD $62,606).

The country is rich in natural resources and is one of the world’s producers of oil and natural gas. It is also one of the world’s largest industrial manufacturing markets. In this regard, the US has attracted immigrants from all over the globe and continues to attract skilled workers. Its biggest trading partners are China (15.7% of 2018 imports and exports), Mexico (14.7%), Canada (14.5%), Japan (5.2%), Germany (4.4%), South Korea (3.1%) and the UK (3.0%).

The USA has been at the forefront of scientific research and technological development since the start of the last century and is home to many of the
top global companies, particularly within the financial and IT sectors. The US also ranked first last year for the breadth and quality of its universities and higher education facilities, attracting international students particularly from Asia.

US investment immigration programmes; Thinking of living the American Dream?

Here is a brief history and understanding of the U.S. EB-5 programme. The United States has one of the world’s most famous residency-by-venture programs. People who partake in the EB-5 program need to invest between $900,000 or $1.8 million in qualified activities creating a minimum of 10 new job positions that are qualified for U.S. workers. Investors will then be able to attain permanent residency and citizenship in the U.S. once the necessary requirements from that investor have been approved. During 2008 and then up to 2015, the EB-5 program generated over $20,000,000 in FDI (Foreign Direct Investment) that in-turn created more than 700,000 jobs in the U.S. that did not cost the American taxpayers.

Here are some investment routes.

What is EB-5? The EB-5 Visa program was acquainted in 1990 to enhance the U.S. economy by encouraging foreign direct investment from non-American Passport holder in order to create jobs.  The EB-5 visa is a green card, giving foreign investors the opportunity to become legal U.S. residents. Every year the US allocates 10,000 EB-5 Visas to non-American Passportsholders.

It is granted to foreign investors who put a lot of cash in a business, regional centre in the United States that creates jobs as part of the investment.

There are two options for EB5 Investment: Direct Investment or Regional Centre Investment to find out the difference email info@blsmedia.co.uk

The EB-5 program doesn’t present citizenship legitimately, however following five years as a green-card holder, it’s conceivable to apply for and American Passport. Time spent as a contingent perpetual occupant tallies towards the five-year holding up period, and the cycle is generally direct as long as financial specialists communicate in English, have kept up a physical presence in the U.S., and can finish a fundamental assessment on U.S. history and culture.

In certain areas called “targeted employment areas”, the minimum investment is $900,00 investment in a USCIS-Approved project. In all other areas, the minimum required investment is $1.8 million. The investment does not have to be all in cash; other assets may be taken into account, including debts, stock, or hardware. The funds must also be shown to come from lawful sources.

How to apply for an EB-5 Visa

Applicants for the EB-5 Visa must first identify a suitable project, either independently or in most cases through a registered broker-dealer or in partnership with a regional center established to pool EB-5 investments to fund large-scale projects. The investment must then be transferred, often into an escrow account, whereupon the investor or their agent can file an I-526 petition to begin their formal application process. The I-526 filing can be complex, and requires both proof that the applicant’s funds were legally acquired and transferred to the EB-5 project, and a detailed description of the funded project, including a business plan showing that enough jobs are likely to be created through the EB-5 investment.

There is often a lengthy delay for I-526 processing; it is not uncommon for processing to last over two to three years.

A successful I-526 petition grants the investor the conditional right to reside in the U.S., subject to consular processing for applicants outside the US, or a successful I-485 petition for applicants already in the US on non-immigrant visas. Consular wait-times vary considerably from country to country but can take six months of longer.

After consular processing or adjustment of status, applicants receive a conditional green card that can be converted to a permanent green card after two years via an I-829 petition. As part of the I-829 filing, investors must show they have successfully created the requisite number of jobs and sustained their investment continuously since beginning the process.

For EB-5 investors seeking citizenship, naturalisation paperwork can be filed 90 days before the fifth anniversary of the issuance of their conditional green card. The citizenship application requires no further investment but does require that the investor show fluency in English and pass a simple civics exam. Once the I-829 petition is approved, the naturalisation process can be finalised.

A green card doesn’t provide mobility benefits, other than the right to reside in the United States, and residents who take lengthy trips outside the US risk being deemed to have abandoned their US residency and forfeited their green card. For investors who gain citizenship, a US passport is one of the strongest in the world, providing visa-free travel to 176 countries.

Benefits of the EB-5 Investor Visa

Frequent questions when applying for an EB-5 Visa

Q1. What is my return on investment?
Q2. How many days in a year do I have to live in the US?
Q3. Can my family members and children get the permanent residency?
Q4. What is the age limit?
Q5. Can I apply without an Immigration attorney?
Q6. What is this “Targeted Employment Area”
Q7. What are the requirements?
Q8. How long is the process
Q9. What are the risk?
Q10. Is my investment secured and guaranteed?

The E-2 Treaty Investor Visa allows a an investor, spouse and children to move to the United States for the purposes of owning and operating a business.

Only citizens of certain countries are eligible. If you are not from an eligible country, please email info@blsmedia.co.uk on how you can be an obtain an E-2 Visa via third country citizenship such as Grenada, Turkey and Montenegro.

US as a country:

For many of the world’s people, the United States remains top of destination wish list. The United States is a vast country, with vibrant cities, sprawling agricultural belts, Diversity and resurgent post-industrial areas where new arrivals can find affordable homes or attractive investment opportunities. American higher education and healthcare are top notch, the economy is strong and diversified, and the country remains welcoming to investors who hope to secure their own piece of the American dream.